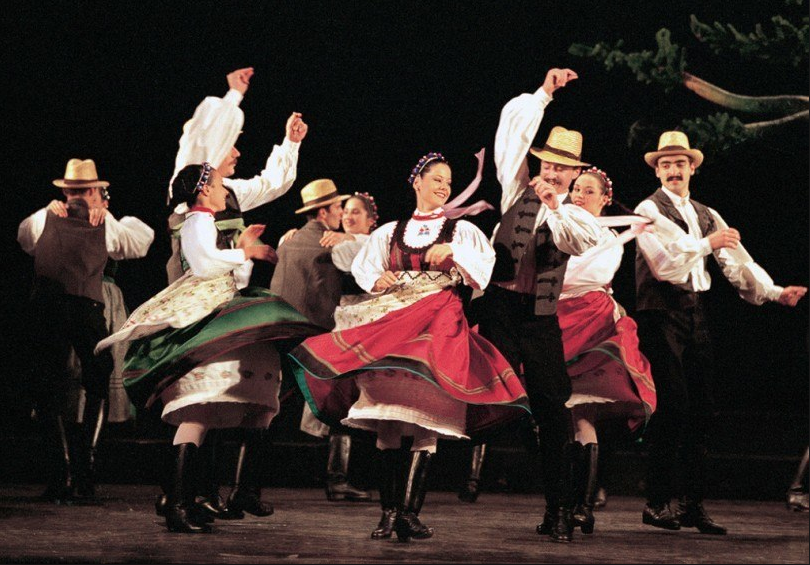 Watch this “panorama” to get a sense of the vibrancy of traditional Hungarian dance today.
https://www.youtube.com/watch?v=UeEcPj9_OpA&t=223s
Hungary has a unique history and culture, which has had a profound influence on neighbouring countries.  Indeed, Croatia, Slovakia, northern Serbia, and Transylvanian Romania were within Hungary until 1918.
The first record of human activity in what is now Hungary is a human fossil & tools from 350,000 years ago.  The first written records date from the Roman occupation, starting 35 B.C.E.  However, around 400 C.E., the Romans were crushed under the weight of “migrations” or invasions from the north, and the steppes of Russia.  First came the Turkic-speaking Huns, then the Germanic-speaking Ostrogoths & Lombards, then Slavs, then Turkic-speaking Avars.  In 902, the Turkic-speaking Magyars took final control.  From their base in Hungary, they began raiding Greece, Italy, Spain, France & Germany before being defeated in 955.  By 1000 C.E. Hungary had converted to Christianity.  It was briefly conquered by the Mongols in 1241, and from 1526-1687, the Ottoman Turks.  From then until 1918 tis main ally/rival was Austria.  Then it was under the influence/control of Germany & Russia.
Thus Hungary is truly a bridge culture between East & West, keenly aware of its roots as conquerors from Asia, but also a defender of European religion and values, by absorbing the shocks of Mongol, Ottoman and Russian invasions. Hungarians today see themselves as the historical “saviors” of Europe.  Its language is Turkic-based, unlike any neighbours, yet its religion is staunchly Catholic.
Traditional dance in Hungary is appreciated and danced with a fervor matched only by Greece.  Indeed, Hungarian composers Bela Bartok & Zoltan Kodaly were among the first academics in Europe to visit rural areas and record vanishing traditions, becoming founding fathers of the field of ethnomusicology.
During the 1970’s a movement called Táncház, “dance house” swept the youth of the nation.  Disillusioned with Communism and Russian domination, they began asserting their Hungarian nationalism by nurturing their unique dance traditions.  For over 40 years, Táncház continue to be a popular alternative to outside (now Western) influences.
https://www.youtube.com/watch?v=UvAe5BwzTLg
Hungarian traditional dance has been studied more completely than in most cultures, and as a result, Hungarian dance names more precisely describe the dance’s location and place in dance history.
Dances are categorized by chronology, (reflecting the history of social dance in Europe),  and region or “dialect”.
1. Oldest are the Karikázó – (the Maiden’s Round Dance).  Chain dances accompanied by singing was the dominant form of dance in Europe in the Middle Ages.  Nowadays only girls and teenagers perform these for their own amusement (as well as in stage performances).  Dances are accompanied by the girls’ own singing.  Examples in our dance group include Somogyi Karikázó and Lakodalmi Tánc.
https://www.youtube.com/watch?v=KKzGTTrtzco

Ugros (Leaping), using the tune Cinege.  Notice how men & women are beginning to dance together, though all do the same steps -no man’s lead.  Music has a bouncy, up & down feel, facilitating “leaping”.
https://www.youtube.com/watch?v=vnDad0J3NSU
4. Verbunk – Recruiting Dances. Beginning in the mid-1700’s, the Austro-Hungarian armies recruited soldiers by staging musical entertainments in village taverns.  Professional dancers in fancy uniforms wowed the local lads, supplied copious drinks, engaged in dance competitions, and persuaded the bumpkins to join (not necessarily mentioning that it was for life!).  Nowadays dance cycles begin with a Verbunk before progressing to a Csárdás.  Well-known North American examples are Gencsi Verbunk & Kapuvári Verbunk.
Kapuvári Verbunk – notice the military march-like rhythm
https://www.youtube.com/watch?v=99XdqsK3274
5. Csárdás – Csárdá were the roadhouses of horse-era Hungary.  The local taverns, if you will. In the early 1800’s in Europe, people were beginning to dance as exclusive couples – early versions of peasant waltzes and polkas were competing with quadrilles and longways set dances as favorites among polite society. A dance appeared in the csárdá, dubbed the Csárdás (pronounced CHAHR-dash), or “dance done at the csárdá”.  At first it was considered a low-life dance, but Hungarian nobility were becoming nationalistic, and were looking for ways to distinguish themselves from their Austrian overlords.  So they refined it, and started promoting it as the “national” dance of Hungarians.  For once, that kind of top-down promotion worked, and the Csárdás is the national dance to this day.
The core of the dance is the Csárdás step, which is simply a sideways step-close; or, more often, a “double”- step-close-step-pause to one side followed by the same to the other side.  The other key element is a slow start (lassu), (this music grew out of the Verbunk) gradually accelerating to a frenetic finish (friss).  The length of dance and rate of acceleration varies greatly with the dancers, mood of the house, and musicians energy (and pay) level.  Improvisation is the key, and variety the norm.
Here’s a couple of examples of a very condensed (2+ minutes) csárdás
https://www.youtube.com/watch?v=W_RpjnZt2GM
https://www.youtube.com/watch?v=8fhUTNbrwsU