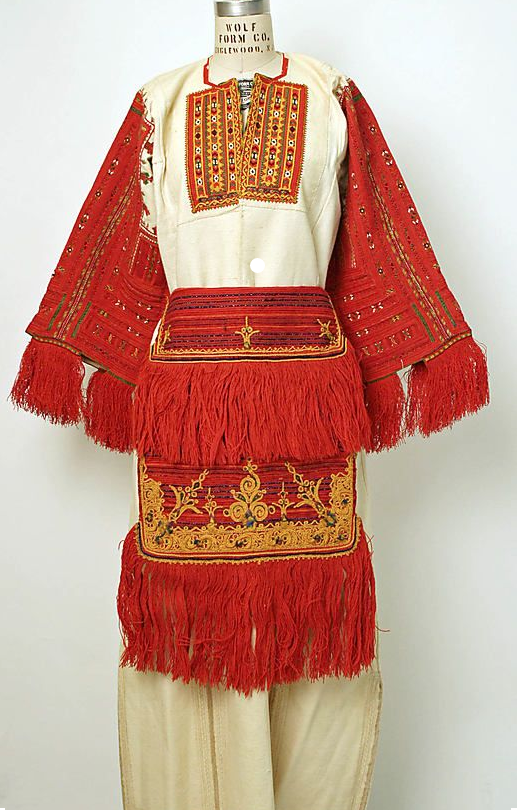 Fringe is a row of strings dangling at the end of an apron, sash, sleeve, shoulder, or belt, especially on women’s folk costumes, and most spectacularly on Macedonian women.

As you can see, fringe comes in many shapes and sizes. Here’s a couple from Romania

So aside from adding to the overall visual effect, is there a purpose for all this string? It’s obviously not a very practical covering, warming or protective device – just the opposite. An intriguing theory as to the origins and evolution of fringe is offered in two highly recommended books by anthropologist, costume historian, linguist and folk dancer, Elizabeth Wayland Barber – Women’s Work, the First 20,000 Years, (1994, Norton), and The Dancing Goddesses (2013, Norton).

First, Barber notes that string, from which fringe is made, is the prerequisite for all fabrics – you can’t weave fabrics if you haven’t got thread – a refined form of string. Thus string is our first plant-based fiber product. For the importance of the invention of string, see: https://folkdancefootnotes.org/clothing/a-brief-history-of-cloth/. Barber then goes on to show evidence that in fact string was our first plant-based clothing – clothing that was not worn for the practical purposes one would imagine (we already had animal skins to keep warm, and modest, if that mattered). By now most of us are familiar with the ‘Venus’ figurines – the earliest know likenesses of the human body – women with exaggerated breasts, hips, and buttocks.

Why a narrow string skirt behind? Barber writes: “Europeans had believed for millenia that women’s fertility resided in their hair. Whence this belief? One of the first signs of a girl’s sexual maturation is the arrival of pubic hair, so people associated her new fertility with her new hair – then postulated that the hair caused the fertility. In Europe 20,000 years ago, we already see portrayals of women of childbearing age wearing a string skirt that echoes both pubic hair and head hair.

“Her skirt consists of long strings hanging down the back from a hip band, and the ancient sculptor has troubled to engrave the twists in each string. Furthermore – a detail I did not notice until I began to make my own drawing from a large, clear photograph obtaained from the Musee de l’Homme in Paris – the sculptor has shown the strings fraying out at the bottom into a mass of untwisted fibers. These cannot be thongs of sinew or hide; they can only be true twisted-fiber thread.”

Women’s use of string skirts and other long fringes as symbols of their childbearing ability continued through the Neolithic and Bronze ages, through the Classical period, and into modern times.“

“These fringes, which may occur on head, shoulders, sleeves, and/or sash as well as aprons …may not be donned until puberty. “Fertility resides in hair” presently extended to female head hair, too, which is why married women in Europe were supposed to cover their hair. (Remember all those caps on married women in Jane Austen movies?) In most of Europe, however, unmarried girls’ hair remained uncovered, and in eastern Europe girls wore it in a single long braid symbolizing maidenhood. The most important moment in the agrarian wedding (as opposed to the Christian one) was when the girl’s single braid was combed out, divided, and rebraided into two braids that were wrapped around her head and covered forevermore with a cap. (Hence our expression of a girl “setting her cap for” a man.) Her hair and fertility now belonged to her husband alone. The symbolism here is that on the wedding bed her pubic hair will also be divided – by the sexual act that will produce babies. So the longer and thicker the girl’s hair, the more suitable a bride she will be…” By extension, longer and thicker fringes became talismans to promote fertility.