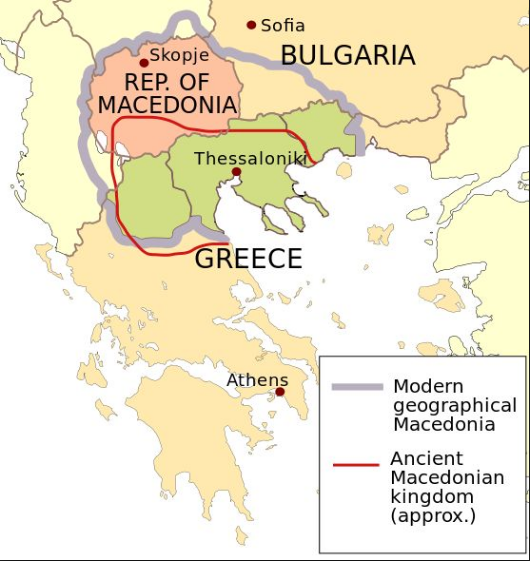 Today’s Macedonia bears little resemblance to the Macedonia made famous by Alexander the Great, conqueror of most of the known world in 323 BCE. His Macedonia was a strip of land north of Greece along the coast of the Aegean Sea, whose rulers spoke Greek; occupied by people who may have been Greeks.

Today’s Macedonia is a former Yugoslav republic 100 kilometers from the Aegean, comprised mostly of Slav descendants who speak a language similar to Bulgarian, with a significant (25%) population of Muslim Albanians, and the largest Roma urban centre (Skopje) in Europe. There is also a region of Greece called Macedonia, and of Bulgaria, called Pirin. What these Macedonia’s have in common is geography – lots of mountains cut by deep narrow valleys.

At what time the Macedonians coalesced in their land is unknown: (geneticists have yet to definitively conclude the Macedonians’ ancestry), but they’ve been there at least as long as the Greeks. Macedonia is a Greek word meaning “Land of the Tall”. Greeks have written of Macedonians as their uncouth northern neighbours; they could speak Greek, but were not considered civilized (Greek). Those writings may be sour grapes, as they were written after Macedonia dominated Greece.

Around 2300 years ago, Macedonian King Philip ll, a brilliant ruler, general and diplomat, managed to greatly expand his territory and gain control of most Greek city-states. Philip’s son Alexander (the Great), an even more brilliant strategist, used this power to conquer Anatolia, down to Egypt, over to India. Henceforth Greeks found it desirable to be associated with the formerly despised Alexander, and the Greeks began claiming him as their own.

Alexander’s conquests did not last, and soon the Roman/Byzantine Empire was in control of Macedonia. Beginning 1500 years ago, Slavs moved in. By 1100 years ago, newly Christianized Slavs adopted the “Cyrillic” alphabet, and Macedonian identity evolved from Greek to Slavic. Populations were scrambled, and control was passed between Byzantines, Bulgarians, Serbs, and finally Turks.

Fast forward to 1912. Greece, Serbia & Bulgaria combined to push the Turks out of Europe, dividing the captured land among themselves. The Bulgarians called their booty Pirin. The Serbs called theirs Macedonia, and so did the Greeks. The territory contained a patchwork of Slavic, Vlach, Greek, Turkish & Albanian peoples. Mass deportations partly ‘corrected’ these ‘imbalances’, but even in the 1990’s, much of Greek Macedonia had a Slavic majority.

With the breakup of Yugoslavia in the 1990’s, there was concern about what was to become of its “republic” of Macedonia. Serbs wanted to incorporate it into Serbia, Bulgarians into Bulgaria, Greeks into Greece, and Albanians wanted the area that was majority Albanian. Most Macedonians wanted to unite the three “Macedonia’s” into one.

At this time it seems likely that things will remain as they are. Greek Macedonians generally prefer to remain in Greece, and many are beginning to identify themselves as Greek: same with Macedonians in Pirin, (Bulgaria). Though Macedonians in Macedonia are linguistically and genetically most like Bulgarians, there is little appetite for joining Bulgaria, (or Serbia); and other countries wouldn’t allow it.

Macedonian culture could be called ‘Middledonian”, as it is a blend of its neighbours and ancestors – part Slavic, Turkish, Greek, Albanian, Roma, Serbian & Bulgarian. The mountainous terrain helps preserve traditions, and folk dancers considered it until recently a treasure-trove of costumes, customs, and dances seldom found elsewhere.