Yaylalar the dance was brought to North America in 1978 by Bora Özkök.  Bora learned the choreography from Hamit Celimli in Istanbul (source; Ron Houston, Folk Dance Problem Solver, 1999).   For Yaylalar the song, see further below. 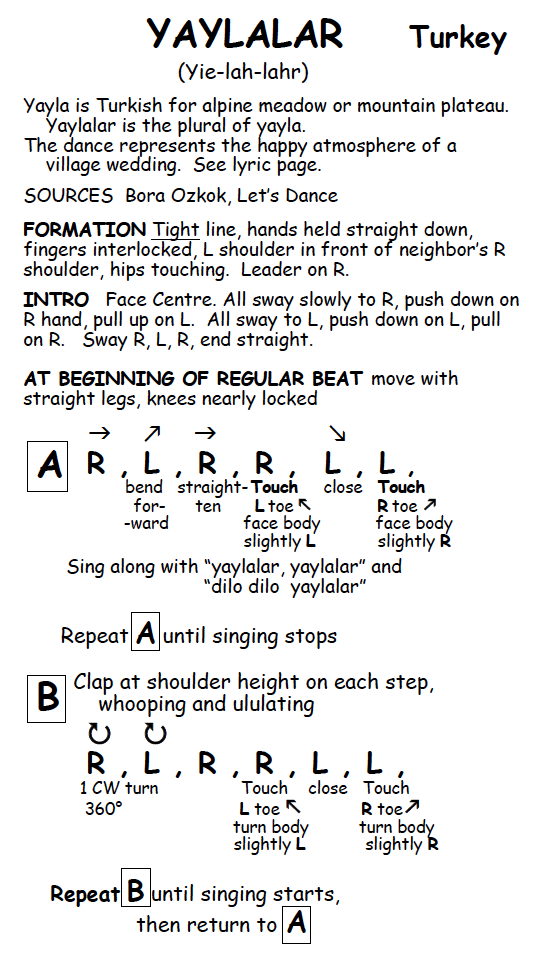 Celimli’s choreography is said to represent “the happy atmosphere of a wedding” halay.  Halay is the Turkish version of the Taproot dance (bar is the Armenian version), and is the most common dance in Turkey.  Celimli’s halay is supposedly from Elazig, a town and region in eastern Anatolia continuously occupied for at least 4000 years by early versions of Armenians, Assyrians, and probably Kurds.  Turks have been in the area about 1000 years.  Here’s a clip of a similar dance from neighboring Dersim region, as performed by Turks in Germany.

It seems what is considered an Elazig halay today is rather more complex and energetic. Notice that the women are doing the basic Taproot halay, even as the men are improvising something more elaborate.

By the time you get to a performing group, the Taproot step has disappeared.

Also notice the music is not Yaylalar, nor is there any clapping & turns.

Yaylalar  is actually the name of a very popular, (folk?) song.  The earliest version I can find is sung by Ahmet Sezgin, from the early 1970’s.

The song has been recorded VERY many times since…

It seems the average Turk doesn’t associate Yaylalar the tune with any particular dance.  A friend of mine was in Turkey a couple of years ago, and after watching a performance of Turkish dance, he happened to mention he was taught Yaylalar back in Canada.  The tour guide knew the song well, but said that she didn’t know there was a dance to Yaylalar.   When an opportunity to dance to the music comes, it appears they’ll plug in a standard halay.  Keep watching, they get it together at about the 1:20 mark.