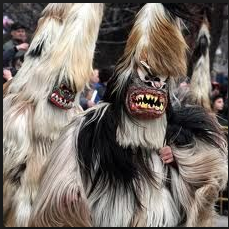 Thrace (see page on Thrace) is generally agreed to be the home of Dionysos, god of wine, agriculture, and the fertility of nature, as well as mystery religions practicing ecstasy and secret rites. Traces of his worship still survive in the form of Kukeri (Bulgarian) and their many cohorts (some listed above). Kukeri and their like are ordinary village men who don extraordinary costumes in spring, usually the Sunday before Lent (Carnival).

They go from house-to-house, or parade in village squares making loud noises to scare away evil spirits, and enact pantomimes, often lewd, to stimulate the fertility of the land. Costumes are often made of goatskin (representing nature and fecundity), and can include very tall conical hats (phallus), which they touch to the ground (seeding the earth). Sometimes plows are included, to mime the start of the plowing season.

Some groups consist of a cast of players, including bride & bridegroom, old woman, doctor, priest, government official, beast, etc. They improvise plots based on traditional themes of death & resurrection, and mock ‘weddings’, similar to English mummers.