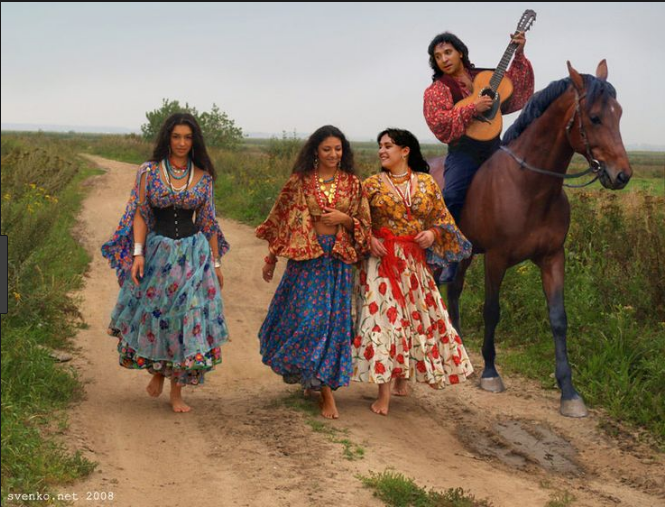 The word Gypsy is an English term for a people seen as either carefree Romantic wanderers, or lazy untrustworthy lowlifes – both definitely outsiders.  Gypsy is a derivative of Egyptian, from where English-speakers thought Gypsies originated.  Other names used by outsiders for these peoples are Cigany, Tsigane, Gitan, Zingaro, Zigeuner, the list goes on.  Whether the term is used with admiration or malice depends on the mindset of the person using it, and it is received according to the mindset of the person hearing it.

But what do these people call themselves? Again – many terms.  Most common these days is Rom (singular) or Roma (plural).  But also Romany, Dom, Kale, Lovari, Sinti, the list goes on.  Some are not offended by being called Gypsy, but most are.

Why so many names?

Partly because these people are are not a single cultural or genetic entity.  They originated in different places at different times, took different routes to enter Europe, and adopted different ways of dealing with Europeans.  Some have chosen to settle down and try to be accepted and integrated into European culture.  Others steadfastly refuse to integrate.  Many are members of various tribes, each with their own customs and dialects.

For instance, “Roma in Romania, commonly known by majority ethnic Romanians as Țigani, include many subgroups defined by occupation:

Because of the complexity of Roma culture, it’s difficult to get even an estimate of the number of Roma.  Guesses (as of 2002) for Europe range from 3.8 million to 14 million.  In addition there are over a million each in North and South America.

Where do they come from?

Everyone agrees the Roma originated in India.  Now for some extensive quotes from the forward (written by Ian Hancock) to Bright Balkan Morning (Written by Charles and Angeliki Vellou Keil).

“So who were those first Roma?  Romani culture, called Rromanipen, rests upon a fundamental, polarizing division between people who are Roma and those who are not….The most common word in Romani for the non-Roma is gajjha, meaning “domestic” or “nonmilitary.”  When we discover the etymologies for other Romani words for non-Roma, such as das, goro, gomi, or xalo, it turns out that they, too  originally meant such things as “prisoner of war”, “one who has surrendered”, “slave”, and so on.  That the words for non-Roma suggest a military-nonmilitary, insider-outsider relationship is strengthened by the fact that Romani military vocabulary (words for “fight,”,”soldier,” “battle cry,” “spear,” etc.) is Indian – like the word for a musician.  It means, then that this aspect of Romani identity originates in India, and wasn’t acquired later”…..

“The linguistic features of Romani place its separation from other Indian languages at no earlier than the 10th or 11th century.  Where this happened, however, presents more of a problem.  Early scholars tried to identify modern-day Roma with a particular Indian people, but Romani is not quite like any single modern Indian language and so cannot be tied to any specific ethnic population.  Instead, it has features shared by several different languages, though all are spoken generally in the northwestern part of India…..This suggests not a single original population at all, but a linguistically and, one presumes, ethnically mixed one from the very beginning.”

“With this information in hand, we now turn to history in India itself to see what, if any, military activity took place in Northwestern India after the 10th century.  The appearance of Roma in the West by about 1300 A.D. provides the upper limit of this window in time.  During the first quarter of the 11th century, Muslim invaders attacked northern India over 25 times in an (ultimately successful) attempt to establish Islam.

The Indian response was to assemble troops, given the name Rajputs,  or “sons of kings” to retaliate.  They were drawn from various non-Aryan ethnic and linguistic populations, perhaps as many as 8 or 9, and sent out to defend the Hindu-Shahi kingdom.  We can conjecture that out of the medley of Indian languages spoken in the military camps a lingua franca arose that became the ancestor of Romani.  That this actually happened in the case of Urdu is well-documented: the very name of that language means “military camp.”  The difference is that Urdu emerged form the military lingua franca spoken by those who remained in India; Romani grew out of the language of those who left…..” 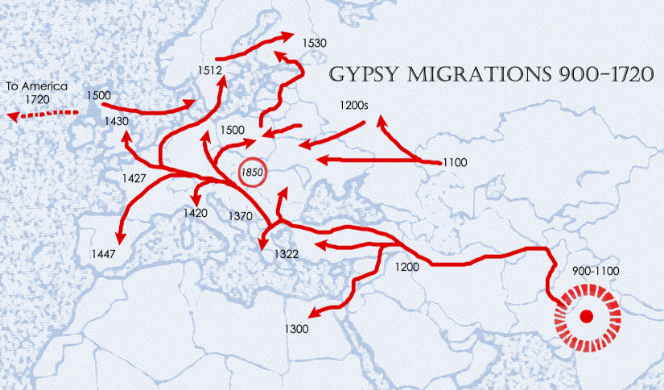 “The move of the Roma , as a military force out of India either routing or else fleeing from the Muslims, took place in the first quarter of the 11th century…This journey did not take long.  Possibly hurried by the movements of the Mongols in the area, the ancestors of the Roma may have been in the eastern Byzantine empire as early as 1100…. Kurdish and Armenian (language) element(s), not insignificant, could only have been picked up here….It is the Greek element in Romani that is truly overwhelming.  Greek items, (between 250 and 300 of them) outnumber all the other words taken into Romani between India and Europe….it is safest to regard modern Romani as a language that took shape outside of India, emerging from a lingua franca native to no one and spoken by a mixed population defined by profession into a mother tongue incorporating lexical and even grammatical elements from numbers of other languages, particularly medieval Greek.

The Romani population too, ethnically mixed from the very beginning, continued continued to incorporate other, non-Indian peoples into its number along their journey west. Despite this, the Roma remain clearly Indian in their genetic affiliation, and clearly distinct sociologically from the surrounding European populations.” 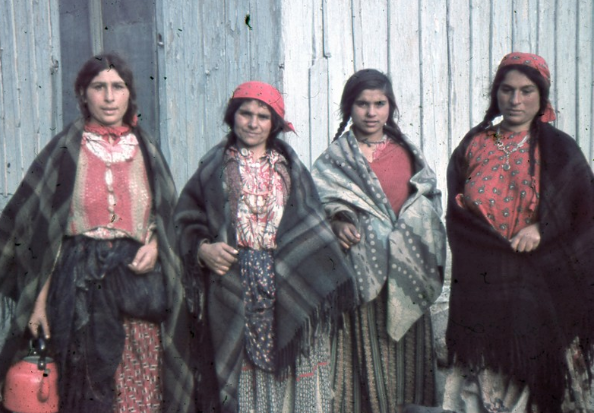 What happened to the Roma after they arrived in Europe?  That’s another story!