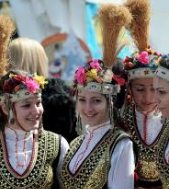 LAZARAVUNÉ in Bulgaria and other S. Slavic regions

LAZARUVANÉ is the Bulgarian word for the folk customs surrounding St. Lazarus Day, the Saturday before Palm Sunday in the Orthodox calendar; lazarka is a girl who participates in the customs. Lazarice is the Serbian word for the day, a lazarica is the girl who takes part. The customs are observed in other South Slavic cultures; Serbian and North Macedonian, and date back hundreds of years before South Slavs became Christian.

The mind of early farmers was preoccupied with how to get the forces of Nature to co-operate – to produce rain, sun, etc. at the correct times needed for their crops. It was thought that the spirits controlling these forces needed the correct stimulus from powerful people, or they would go astray.

In Spring, the spirits of fertility needed to be resurrected from their winter ‘death’ and encouraged to produce. Women were obviously the most powerful life-givers, and girls of child-bearing age who had not yet given birth were most powerful of all, because they had not diluted their potential.

Christianity was intolerant of such practices unless brought under church control, so peasants blended their Spring ritual with the biblical story of Christ raising Lazarus from the dead, ‘coming from the earth’.

By the early 1900’s, Lazaruvane had added many layers of meaning, becoming the Bulgarian version of the Debutante’s Ball. It was the girl’s official ‘coming out’, and it was believed she couldn’t get married until she was a Lazarka.

She spent years preparing her costume, which involved personally spinning and weaving the fabric used to make her multi-layered outfit, adding elaborate embroidery, gathering coins and jewelry for adornment, making a headdress of flowers, ribbons, etc. Lazarki costume included some element of bridal finery. Some dressed fully as brides, borrowing pieces when necessary. She also learned numerous songs and dances.

How she presented herself showed everyone how industrious, skilled, and vigorous she was, which mattered to potential suitors and their families much more than her beauty. A new couple’s future depended on her skills, and a skilled Lazarka could attract a better husband.

After Lazaruvane, she and her family could entertain proposals of marriage. She was also allowed to dance in the weekly village Horo. Many regional variations developed, including having some girls dressed as men, and allowing much younger girls to participate.

Girls eagerly anticipated preparing for Lazaruvane; it was a bleak time of year, they’d been cooped up in the house all winter, and Lent had begun, (in which no singing or dancing was allowed except for practicing Lazarki!) They formed themselves into firm groups of 6-8, chose a leader, and began meeting in each others’ homes to practice singing and dancing. An experienced Lazarka was enlisted to teach.

Households welcomed a visit from the Lazarki, as it was thought to bring good luck. The lead girl would place a handkerchief on the shoulder of the lady of the house, and it was returned with a small gift – a coin or food.

At the end of the day the girls would have a feast of the days’ gatherings. A ceremony known as kumičiné may be performed whereby wreaths are thrown in a stream. The first girl’s wreath to drift to a pre-arranged spot will be the first to marry. A final dance may be performed before a gathering of married women and single men, who then choose future brides.