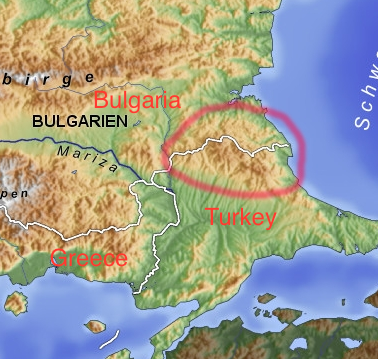 Strandja (also Strandzha, Strandža) is an area between Bulgaria and Turkey, roughly 3800 square miles, defined by the Strandja Mountains (up to 3400 feet high) and the Black Sea coast.  The region was not covered by glaciers during the last ice age, and thus has a rich ecosystem, unique in Europe.

Inhabited by the Thracians in antiquity, Strandja is an area with a large concentration of ruins of Thracian sanctuaries, sacrificial altars, dolmens, and other archaeological objects.

Control of the area passed from Greeks to Romans to Byzantines (Greeks) to Ottomans (Turks), resulting in a patchwork of ethnic communities. In 1912, Bulgaria captured part of the region, and began expelling Strandja Greeks and Muslims.  The area is still sparsely populated.  However there are several communities of  Bulgarian Strandja descendants in both Greece and Turkey.

Strandja is noted for being a mystical land; the humid Black Sea breezes creating atmospheric fogs, lush forests and magic springs, and populated by ancestors of Thracians never fully converted to Christianity, Islam, Communism or Capitalism.