*1st Generation dance. A dance that developed in a traditional way – not ‘taught’ by a teacher or choreographer, but ‘learned’ by observing and imitating others in your “village”, where the village’s few dances were the only dances anyone knew. It usually is ‘generic’ – the dance pattern is fairly simple and not tied to any particular piece of music. The dance phrase may or may not match any musical phrase, but the music’s rhythm must be suitable for performing the footwork. This dance may have many variations, but they’re performed at the whim or inspiration of the leader or (sometimes) any other dancer so long as it doesn’t interfere with the flow of neighboring dancers. For more, click here, here, and here.

Kostursko Oro is an unusual case of a 1st Generation dance that is no longer performed in its country of origin, and possibly not even by immigrants abroad, but was collected, faithfully preserved, and is still danced by the recreational folk dance community.

In California in the mid-1950’s John Filcich, a Croatian-born researcher and leader of the American folk dance community, learned a dance from a Macedonian immigrant, Mrs. Sveta Kosta.  She remembered this dance as being popular with women when she was a young girl in her town of Kastoria, Greek Macedonia.

Kastoria was the new Greek name given to the town previously known as Kostur, which had for centuries been part of the Ottoman Empire, and had only recently been awarded to Greece (a spoil of the Balkan Wars of 1912-1913).  Kastoria/Kostur lies near the current Greek-Albanian-Macedonian border, and its population at the time of Mrs. Kosta’s childhood, though majority Greek-speaking (unlike the English soundtrack to this YouTube), had sizeable Turkish Muslim, Slavic, Albanian, Jewish, and Roma populations. 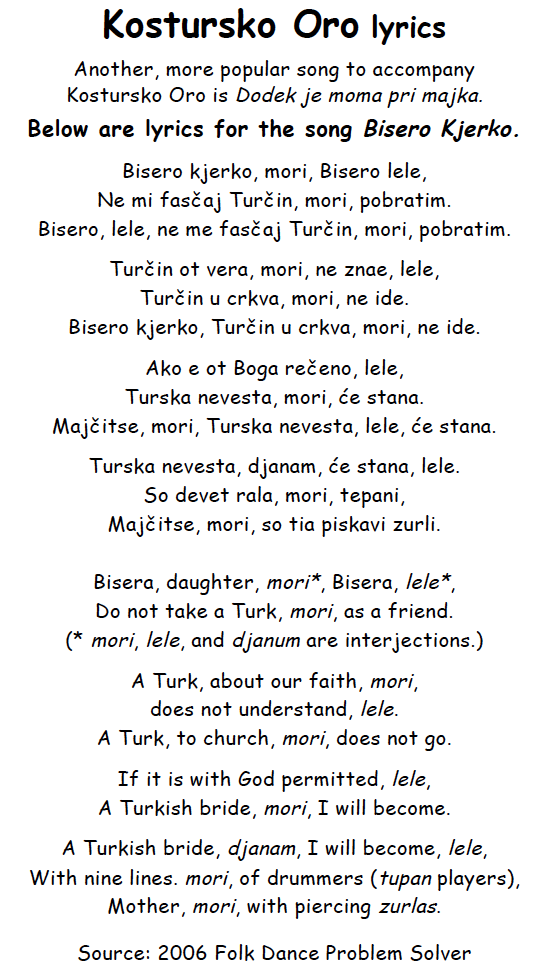 John decided to call the dance Kostursko Oro, after both Mrs Kosta, and the town’s Macedonian name of Kostur.

At some point in time, some recreational folk dancer substituted the song Dodek je moma pri majka for Bisero Kerko.  It seems most folk dance groups have chosen to dance Kostursko Oro to Dodek over Bisero.  Neither tune is  “correct”.  My preference is for Bisero. 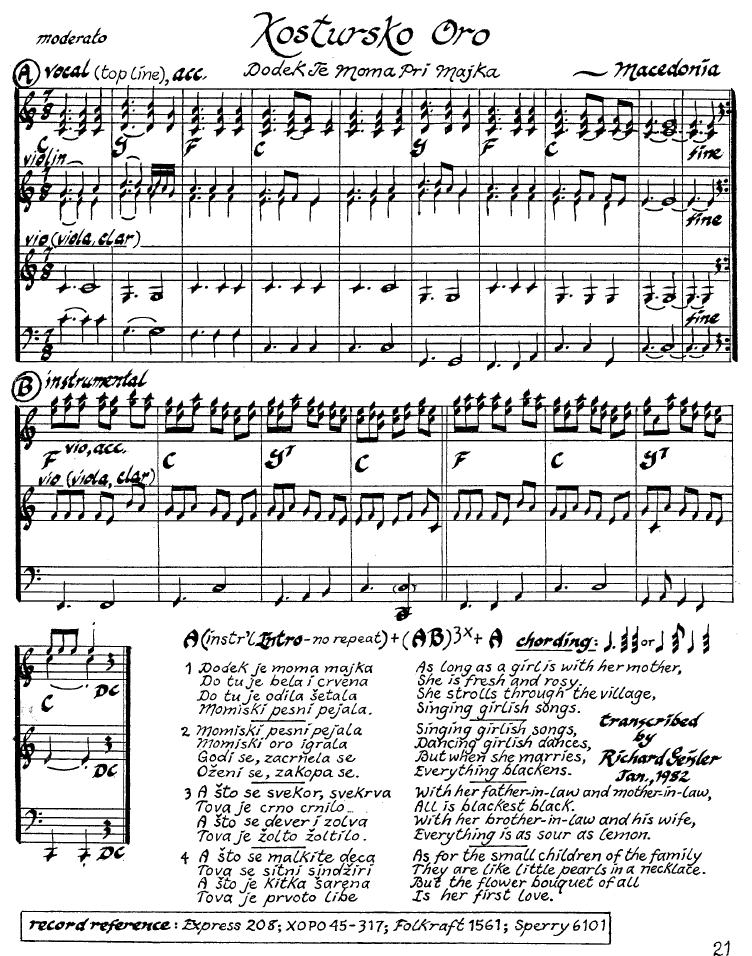 My source for all this information is the 2006 Folk Dance Problem Solver.  In it, indefatigable researcher Ron Houston uncovers some styling notes:

Based on those notes, a revised set of dance notes would look like those published in the Problem Solver:

But wait, that’s not all!

In the 1970’s noted dance researcher Bob Leibman filmed the Macedonian/Albanian song and dance Mori odajo šarena.  (Albanian title – Staua dzua tu livahdi).  Bob believes this combination was what Mrs Kosta was trying to remember when she taught her dance to John Filcich.  Mori odajo šarena has since been promoted as the “real” Kostursko Oro, though many authorities are not convinced.  I have found no YouTubes of Mori odajo šarena being danced in Macedonia.  However, the song is still popular.

Meanwhile, back in Macedonia,

During the 1922 population exchange between Greece and Turkey, Kastoria’s Turks were sent to central Turkey.  Most of its Jews were sent to concentration camps during WW2.  Immediately following, a civil war between Greek communists (aided by Albanian & Yugoslav communists) , and right-wing royalists (aided by Britain & the USA) raged in the area.  The Royalists won, and a result was the sweeping of most non-Greeks from the Kastoria region.

Eventually, Kostur-area Slavic refugees who remained in Europe coalesced in Yugoslav Macedonia and formed a group, calling themselves the Kosturčanki, dedicated to preserving the culture of their vanished homeland.

They selected for their anthem the song Mori odajo šarena (“oh chamber of many colors”).  By slightly tweaking the lyrics the title became Mori čupi kosturčanki (“you Kastor girls”), except for skipping a few stanzas, the rest of the lyrics stayed the same.

Widen the dancing circle
To see your dresses

To see your dresses
whose dress is spotted

Whose dress is spotted
For I will fall in love

For I will fall in love
by the dress of the girl.

The song became a staple of Macedonian performing groups, representing “Aegean Macedonia”, which some still claim as “theirs”.

The Atanas Kolarovksi version (below).