Bulgaria is named after one of its many invaders – the one with the least lasting influence. The Greeks were the first to write about the land that is now Bulgaria. They called it Thrace (see Thrace), after its first historical inhabitants, the Thracians.

Shortly thereafter (2500 years ago), Thrace was invaded by the Persians, then the Macedonians, Celts, and Romans (46 AD). Roman rule evolved into Byzantine (Greek speaking) rule, which controlled Bulgaria sporadically until 1185. During that time, several ethnic groups invaded (Huns, Goths, & Russians) or settled (Slavs & Pechenegs) the land.

Meanwhile the Russian steppes north of the Black Sea were awash with Turkic-speaking tribes jostling for territory. One of those groups was the Bulgars, who briefly (630-635) united their tribes to rule a large area. Upon the death of their Khan, they split back into tribes and were pushed into Europe by more powerful foes.

Led by Khan Asparukh, a Bulgar tribe followed the Black Sea coast, crossed the Danube, and met 7 Slavic tribes who had untied to fight Byzantine rule. Asparukh became their leader, and in 680-681 they defeated a Byzantine army and signed a treaty creating an independent state. Bulgarians consider 681 the foundation date for their country.

This animated map should be taken with a grain of salt.  I include it as an example of the vastly changing fortunes of Bulgaria as a territory, though details are open to dispute.

The mountainous Shopluk region around Sofia, the capitol, claiming to contain the ‘purest’ Bulgarians, (they have the fastest, most energetic dances), has a 40% Slavic makeup. Bulgaria shares a 70% similarity to Serbians and Montenegrans, 79% to Greeks, 77% to Macedonians, 75% to Romanians, 67% to Hungarians. The greater similarity to Greeks than to Serbs reflects its higher percentage of pre-Slav genes.

After 681, Bulgaria kept expanding, reaching its political and cultural zenith in the period 960-1300; stretching from the Black Sea to the Adriatic and Aegean. 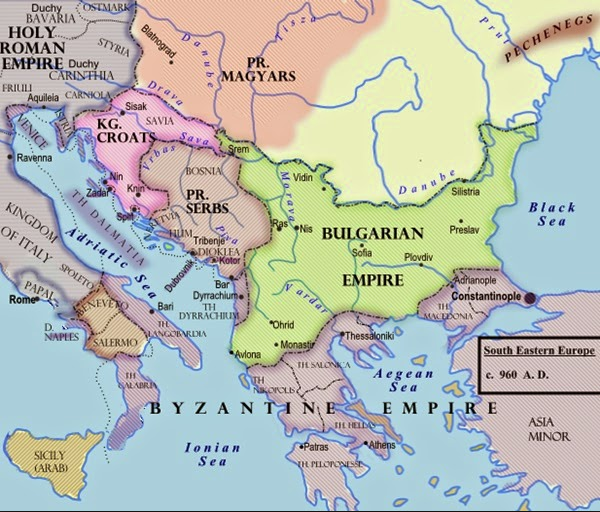 In 870, Bulgarian Khan Boris l made the fateful decision to accept the Byzantine (Greek Orthodox) version of Christianity. He had been negotiating with Rome, but Constantinople offered him a better deal. Part of the deal was the new Slavic alphabet, known as Cyrillic, devised by Greek monks Cyril & Methodius. Reading & writing in their own tongue meant Slavs could unite while resisting cultural influence from outsiders.

After its adoption by Bulgaria, the Cyrillic alphabet and Orthodox Christianity went on to conquer Macedonians, Serbians, and Russians. Cyrillic ultimately contributed to Slavic isolation from the West, and Russian empathy with Bulgaria (and Constantinople).

In the period 1000 – 1400 various forces from East and West jostled with Bulgaria for control of South Slavic lands. The 700-year Bulgarian-Byzantine rivalry is still echoing in Bulgarian-Greek animosity.

In 1396 the Ottoman Turks settled in. They ruled for 480 years, until an uprising by Bulgarians (1876, and later supported by Russian troops) succeeded (in 1878) in throwing off the Ottoman yoke.

A series of military adventures and misadventures, and a revolving door of kings, dictators and corrupt politicians has dogged the Bulgarians ever since.