*1st Generation dance. A dance that developed in a traditional way – not ‘taught’ by a teacher or choreographer, but ‘learned’ by observing and imitating others in your “village”, where the village’s few dances were the only dances anyone knew. It usually is ‘generic’ – the dance pattern is fairly simple and not tied to any particular piece of music. The dance phrase may or may not match any musical phrase, but the music’s rhythm must be suitable for performing the footwork. This dance may have many variations, but they’re performed at the whim or inspiration of the leader or (sometimes) any other dancer so long as it doesn’t interfere with the flow of neighboring dancers. For more, click here, here, and here.

Yiddish dances are inextricably linked to Yiddish music, or Klezmer.  See also the article on Klezmer under MUSIC.

Yiddish dances are the dances of the Eastern European Yiddish-speaking culture – 5 million strong- that existed in Poland, Czecho-slovakia, Germany, Lithuania, Ukraine, Hungary, Romania, Russia and elsewhere, before the Nazi-inspired Holocaust.

The dancing below is done to the tune Der Alter Bulgar, a Romanian melody, and shows some typical Yiddish moves.

The documentary below is primarily about Klezmer, the musicians who played for Yiddish events, but they are the people who gave Yiddish music, and therefore Yiddish dancing, its distinctive style.  Today, Yiddish dances are known primarily for the type of klezmer music played – similar to how a semi-trained ear can recognize polka music and begin dancing a polka before being told its a polka.  The tempo, mood, rhythm, key or scale – are all clues to the type of music being played.  Reflecting its Hassidic roots, Yiddish dancing is more about feeling than choreography.

Yiddish dancing has undergone a revival driven by the revival of klezmer music.  Thus popular Yiddish dances today are similar to the most popular Klezmer tunes.  They include;  Slow Hora (Hora, Zhok), Freylekhs, & Bulgar.  These dances have their own listing under Living or 1st Generation dances.

The 3 minute mark in this documentary demonstrates one of the most common Yiddish melodies, known as the Hora, Slow, Hora, or Zhok (see Zhok under 1stG Dances). Again, at 4:53 is the Slow Hora “Gilner Gasn”.

At 8:03 we find that Yiddish musicians (and dances) were often the music and dances of their neighboring non-Jews. The Rhythm here is called a Bulgar (Bulgarian) in 8/8 time, with accents in beats 1, 4, &7.

At 10:04 we see how Jews and Gypsies often played in the same band, and learned from each others’ musical traditions.

There are other dances in addition to Slow Hora (Hora, Zhok), Freylekhs, & Bulgar that are considered distinctly Yiddish.  Certainly the Mitzvah Tantz, where the Rebbe and select others dance before the bride. 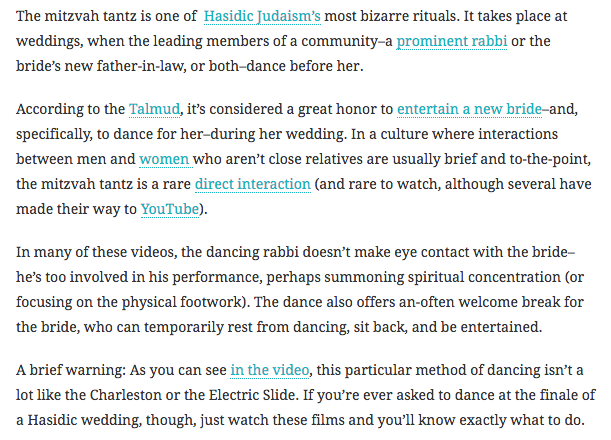 Another Yiddish dance is the SHER.

Helen Winkler, who is teaching above, has this to say about Sher:

The concept of this dance holds a lot of lessons for life today. It was customary at a shtetl wedding for two individuals, usually the mothers-in-law, to dance a pantomime of fighting and then making up, a life lesson for the newly married couple.

The famous “Bottle Dance” is not a traditional Jewish folk dance but the razzle-dazzle creation of director-choreographer Jerome Robbins. Robbins had previously staged West Side Story and Gypsy. He did “field research” for Fiddler by attending Orthodox Jewish weddings and festivals where he was thrilled with the men’s dancing. He observed one man entertaining a crowd by tottering around with a bottle on his head pretending to be drunk. Robbins took that image and elaborated to create the Broadway showstopper featuring four dancers performing precise, electrifying moves.
Read more: https://www.smithsonianmag.com/arts-culture/six-things-you-may-not-have-known-about-fiddler-roof-180952771/#zeiAwgccTSp21LiX.99
Give the gift of Smithsonian magazine for only $12! http://bit.ly/1cGUiGv
Follow us: @SmithsonianMag on Twitter