Karikázó (KAW-ree-kah-zoh) are Hungarian women’s dances, performed in a circle, usually with a front basket hold.  Karikázó are traditionally sung acapella – no instrumental accompaniment.  It could be argued that Karikázó are not so much dances set to singing as they are songs set to movements.  Movements are few, songs are many, and a particular occasion calls for particular songs – the movements are secondary.

To quote the pre-eminent Hungarian dance scholar György Martin “Popular language does not call them dances (i,e, tánc, the Hungarian form of the international word, is not used), but uses various expressions denoting movement in a circle instead.  This linguistic distinction indicates that in the eyes of the Hungarian peasantry, stepping a round dance is not identical with dancing in the strict sense of the term,  It was performed during breaks in village dancing jollifications; Lenten prohibitions did not apply to it; on the contrary, Lent was its chief season.

The Round Dance (Karikázó) was performed by maidens only; a girl could only join it once she had truly grown into a lass, into a nubile maiden.  Lads watched from the outside and “spoiled the round” when they dragged their girl out of the chain,  or joined for a short time at a stage when when it was about to transform itself into a couple dance.  Its original accompaniment was unison singing, the song being more important than the dance.  What mattered were not variations in the steps but the succession of innumerable stanzas sung to various tunes.”

Somogyi is a Hungarian county, bordering on Croatia.  Somogyi Karikázó means a collection of women’s songs and movements from Somogyi County – not necessarily any particular songs or movements. In the late 1960’s-early 1970’s a recording was made by the Girls Choir of the Bartok Ensemble (Qualiton LPX-18 007) of a suite of Somogyi songs “Eva szívem eva”,  “Azert jöttem ide karikázni”, and another set of lyrics to the same melody “Piros alma bele esett a sárba”.

For sheet music to this set of songs, see MUSIC> SHEET MUSIC. 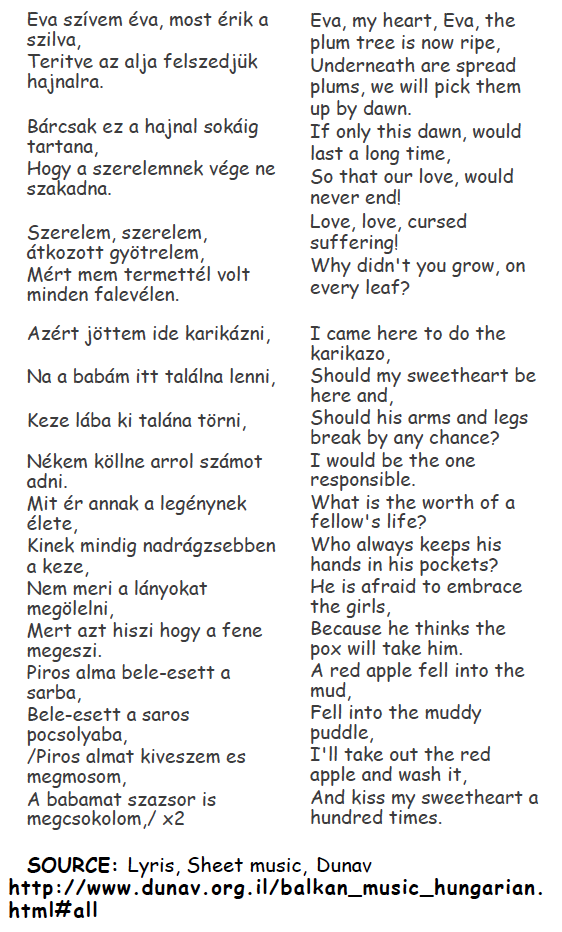 Andor Czompo choreographed a set of typical Karikázó moves to this recording, and an IFD classic dance was born.

A search for performances in Hungary of the Czompo choreography of   Somogyi Karikázó  has yielded no results.  There, Somogyi Karikázó means any collection of Somogyi songs performed in a Karikázó.