Leros is a little Greek Island between Ikaria & Rhodes.  Leros means “dirty” or “grubby” in Greek.  According to Lawrence Durrell “Leros is a gloomy shut-in sort of place, with deep fjords full of lustreless water, black as obsidian and as cold as a polar bear’s kiss……the inhabitants of the island are regarded as something out-of-the-ordinary by the other little Dodecanese islands.  They are supposed to be surly, secretive, and double-dealing, and in my limited experience I found this to be true.  But it may be that uncomfortable winter journeys across the channel that separates them from their neighbours (it is a mile at the widest) result in their giving this impression, unfairly.”

Nevertheless, to the International Folk Dance crowd, “Lerikos” is a simple, lighthearted dance to bouzouki-fueled music sung by Rena Dalia.  Is it from the island of Leros?  Ron Houston devotes 4 pages of his 2004 “Folk Dance Problem Solver” to unravelling the mystery.  Probably not.  There may be a base in the dance of Leros (see Lerikos under Living Dances), but the Lerikos commonly known seems to have originated in New York.  See the 2004 & 2005 Problem Solvers for the details.

There definitely is a dance, native to Leros, called Lerikos (see Living Dance Lerikos) but neither that dance nor its music bear much resemblance to the North American version.

The music below was sung by Rena Dalia, a well-known Greek singer, likely recorded in New York.  The song was called Eba St’ Amaxi (Get in the car, doll).  The word Lerikos doesn’t appear in the lyrics.  In fact “Lerikos” translates as “lyric”!  In the Rena Dalia version, (recorded around 1954-56) she sings “let’s go for a spin to Sheepshead Bay, to Rockaway”, two beach resort areas of New York City.  Another, 1962 version of the song by Greek singer Kaity Grey has almost identical lyrics; except her suggested spin is to Falera, Tzitzifyes, and Pasalimani, three areas of Piraeus; the port of Athens and home to bouzouki music. 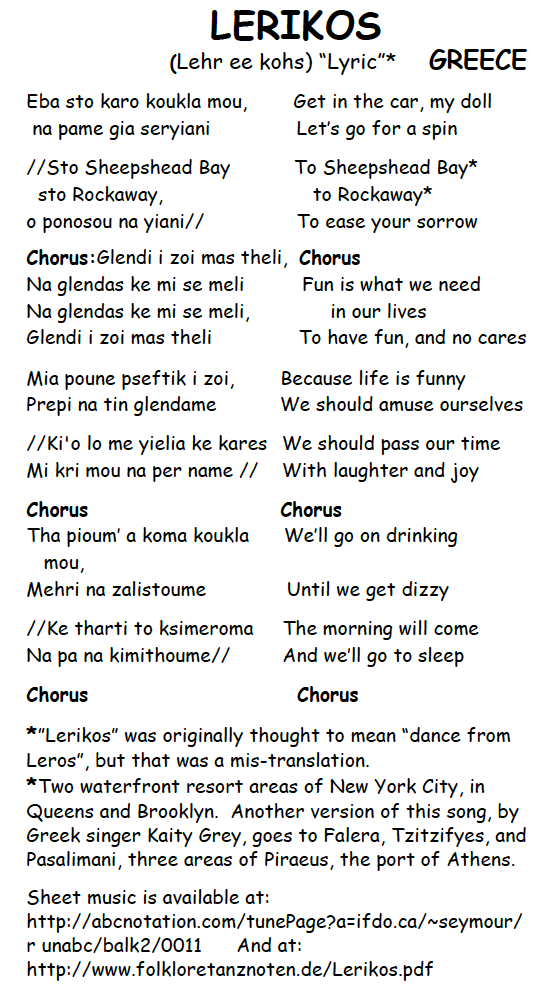