Misirlou is a song, probably a folk song, as the author of the melody has never been identified.  The word Misirlou is rooted in the Arabic term for Egypt – Misr.  In Turkish it becomes Misir. Add the suffix li, and the word becomes Misirli and means “from Egypt”, or “Egyptian”. Misirlou is the feminine form, so Misirlou is Turkish for “Egyptian woman (girl)”.

“The song’s oriental melody has been so popular for so long that many people, from Morocco to Iraq, claim it to be a folk song from their own country. In fact, in the realm of Middle Eastern music, the song is a very simplistic one, since it is little more than going up and down the Hijaz Kar or double harmonic scale(E-F-G#-A-B-C-D#). It still remains a well known Greek, Klezmer, and Arab folk song.” Wikipedia

In 1919, famous Egyptian composer/singer Sayed Darwish recorded Bint Misir “Egyptian Girl”, but that recording has been lost, and there is a debate as to whether his Bint Misir is the same melody as Misirlou.  The earliest surviving recording of Misirlou is a 1927 version by Tetos Demetriades, made in New York for the Greek immigrant market.

The recording was conceived to accompany tsifte telli, form of rather demure Greek belly dancing.  Misirlou is still thought of that way in Greece today – as music for tsifte telli.

The author of the Misirlou’s Greek lyrics is also a subject of debate. The current copyright holder is Nick Roubanis

…………… “My mother met Nick Roubanis in NYC in the fifties when he was quite old. She says he wrote the song because her business partner who was Albanian-owned Balkan records in the old Greektown on 29th Street and 8th Ave-Baba Ajdin Aslan said Nick Roiubanis was the composer. There are a bunch of people now trying to trash Nick Roubanis but Baba Ajdin Aslan was an expert on Middle Eastern music and he said he wrote it. Roubanis was an old guy-just because it took him a few years to get it published with a copyright date didn’t mean he didn’t write it. I’ll just say it sounds like modern people trying to “debunk” everything they ever hear from the past. My Mom said, “This is crap I’m reading about Nick Roubanis. If Baba Ajdin ASlan says he wrote it-he wrote it!” I can vouch for Baba-he even knew a tune from the ancient Kingdom of Lydia which does not even exist any more. He knew quite a bit.” 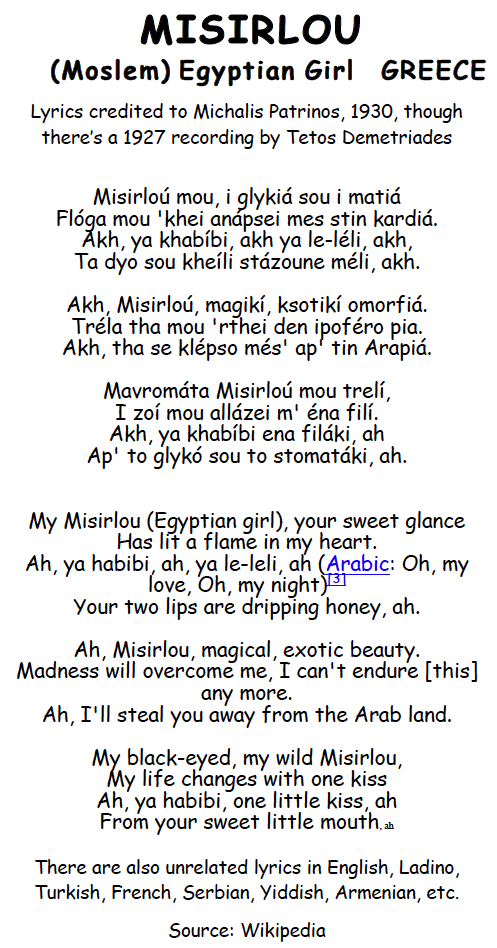 In 1930 Mike Patrinos recorded a rebetiko version in Athens, thus starting a pattern of re-recording and re-envisioning that continues to this day.

By the 1940’s in the USA Misirlou had gone mainstream.

The melody’s exotic (to Westerners) nature has led to some bizarre permutations.

In 1960 the song was re-imagined by a Californian whose Lebanese father called him Richard Mansour.  He called himself Dick Dale.  He is credited with inventing Surf Rock, which is based partly on the “exotic” scales he grew up with.

Some claim that Misirlou is the most-recorded song in history, in terms of number of different versions.  Google Misirlou and you’ll spend at least a day exploring the variety.

So what’s all this got to do with Misirlou the folk dance?  See Misirlou under 2nd Generation dances.